IT’S POSSIBLE TO INSPIRE AND ENERGIZE EACH OTHER ONLINE TOO 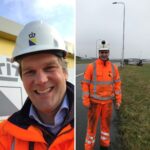 In January, Menno van der Ploeg, Director Projects at Boskalis Nederland and Jan Tetteroo, Assistant Foreman, took part in an online NINA Management training course. Its format and degree of interaction came as a positive surprise to both of them.

At the beginning of the online NINA Management training course, the participating employees become acquainted with NINA and each other. They then continue the conversation in breakout rooms. The program's core component involves discussing personal safety dilemmas. How can you help each other when faced with dilemmas, and how do you exert influence in difficult safety situations? The dilemma put forward by Jan involved an accident in which a colleague was hit by a van reversing into his workspace. “He came away with a few grazes, but it could have been much worse. I wanted to hear from others what they would have done to prevent any future recurrence."

An open atmosphere
Before taking part in the course, Menno was interested in finding out how other people within the organization deal with NINA in day-to-day practice. "I've been working here for two years now. Boskalis is more value-driven than my previous employer and encourages good discussions about safety. One thing that I do sometimes find difficult is that the Values are not as clear-cut as the Rules. There's only one way to explain safety rules, but Values demand more from individuals. I've noticed that this makes you think about what they're for a bit more." Menno liked the fact that the atmosphere during the training course was open, just as it needs to be in the workplace. "The facilitator led the session in such a way that nobody felt inhibited talking about difficult subjects. The training course was pretty much as good as an in-person course."
Jan feels the same. "When you get together in the breakout room, it feels just like the four of you are actually sitting around a table together." Jan learned a lot from the input of his colleagues from other disciplines and other parts of the world. “The response to my dilemma was that we need to be more proactive in terms of what we do with the observations we make. At the moment, we would speak to the driver and, if it were to happen again, would tell his manager. But agreeing proper rules in advance and sitting down together at the table if things do go wrong would be a more effective approach."

Storytelling
Menno found the stories shared by his colleagues to be valuable because they were inspiring and energizing. They also provided insights into how those colleagues see their role where the NINA Values are concerned. "A captain talked so vividly about an accident on board his vessel that it was like being there yourself. That makes an impression on you, and that's when your awareness grows. And your understanding of each other too." For Menno, the training course served to confirm the importance of sharing stories. “Even if there has been a near miss, we should take the time to tell the story. I also know how hard it is for people to share near misses, rather than resolving them and moving on. But we could and should do more with these so that we continue to grow and learn. That's definitely something I'm going to work on."

"It's important to keep sharing stories."