We do it together! Travailler ensemble! 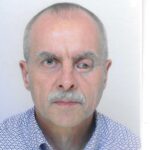 If Project Manager Frans Thomassen was asked to put one motto on a sign, it would be: ‘We do it together’. At his current project, on the Togo-Benin border, this is called ‘travailler ensemble’. This shows in every detail: from the way the contract was set up to the communication lines with the local community. Report of a project with major challenges.

Togo and Benin are two of the seven countries selected by the World Bank to help finance projects tackling coastal erosion due to climate change. (www.wacaprogram.org). Changing wave conditions are causing two to ten meters of coastal erosion annually, thereby threatening the livelihood of the community. They are losing their fertile lands and have to move their houses to keep ahead of the water. The project in which Boskalis is a partner entails the protection of 50 kilometers of coastline. The coastal strip is divided into four sections, each with a different approach. The project will involve the construction of breakwaters as well as a sand motor. Boskalis works with a core project team and local employees (100 out of the 150) carrying out the work. By now, many tons of stone have been supplied by truck (265,000 tons in total). At a later stage, the Willem van Oranje will join the project for the operations at sea. 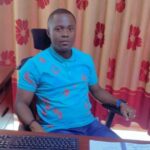 The project has the World Bank, the Togolese and the Benin government as clients. “They all have their own rules and regulations,” says project engineer Tranquillin Mensah, responsible for quality. “This confronts us with quite some challenges, for instance in the documentation,” he explains in a Teams meeting together with his SHE-Q colleague Judith Koukpo. She experiences the same when it comes to safety regulations. In addition to these large parties, there are several stakeholders closer to the project, such as the local mayors, who have always played a major part in day-to-day management. And of course, there is the local community, many of them fishermen who take their boats out every day to earn a living. 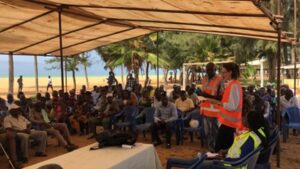 Frans Thomassen is committed to making sure that all the parties involved see it as their project. This also goes for the contract, he explains. “The initial plan was to tackle 50 kilometers of coastline as one single worksite. But this would have serious consequences for the fishermen. For this reason, I wanted to divide it into segments, so that they would be able to continue their work. So that is how the contract has been adjusted now.” And this proved to be a good move, according to Frans: “During a radio broadcast about this project, a listener literally asked me this question: are you going to take away our livelihood? I was able to reassure him and explain how we go about it and why.” 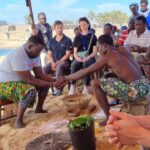 There are several more examples illustrating the efforts of the project team to build trust, in order to implement the motto ‘travailler ensemble’. According to Tranquillin a good example is the fact that the team took part in the blessing ceremony lead by local voodoo priests. “This shows you have the intention to do the job with respect for and in harmony with the people living here.” For this the World Bank complimented the project team.

Safety risks
The biggest safety hazard of the project is the fact that inhabitants almost literally live on site, whereas they’re hardly aware of the risks. Tranquillin recognizes this from his own childhood, he says: “When I was a kid and trucks drove through our village, we ran after them, trying to touch the wheels. We did not know the risks. That’s exactly what I see here.” This lack of safety awareness calls for both strict rules and measures to protect the people, as well as education. 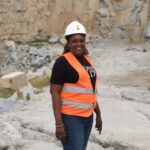 “Safety is an attitude,” Tranquillin and Judith say. That is why they visit schools for instance, to show the kids what you can and cannot see from the truck cabin. Also, since the start of the project, we discuss the work with the local community in weekly meetings. That tells us volumes, says Frans: “We placed ‘grievance boxes’, on the site and in the village, in which people can actually deposit their complaints. This is how we found out that the transport is causing (too) much dust, whereupon we decided to have our water trucks drive more often.” 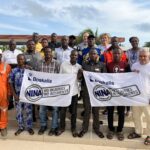 To enhance safety awareness also subcontractors take part in NINA DO-IT training sessions. Goal is for them to recognize and acknowledge hazards and alter their behavior, explains Judith. “NINA helps all of us to work safe. Repeat the message is key. That’s why at the end of the daily safety talks we always say our slogan out loud: ‘safety first, safety first, safety first’.” This is starting to bear fruit: subcontractors, truck drivers, engineers, they are all writing SHOC cards by now, according to Frans: “This means they make observations. And they are not afraid to tell us about them.” Finally, we are facing a wholly different risk at sea: the risk of piracy. For this reason a couple of marines are stationed aboard the Willem van Oranje. 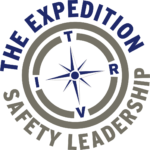 “It is very important to set a good example here", says Frans. “That is why we send out the message that we do it together, from high to low.” For the reason several sessions of the NINA Safety Leadership program have been organized, for a broad selection of employees. Judith is happy with it: “I do need the commitment of the management to be able to do my work properly.”All in all, Frans, Tranquillin and Judith are pretty satisfied with how things are going safety wise. During transport nothing much happened, apart from two overturned trucks. The most important part of the work, at the beach, still has to be done. “Especially here safety awareness is of major importance”, Judith says. She has made ‘no injuries, no accidents’ her personal goal. Frans is looking even further: “Not only do we want to leave behind a well-protected coastline, we also want to create higher safety awareness. By doing so we aim to make a lasting impact.”