"PROUD OF OUR TEAM LIVING BY THE NINA VALUES WHEN IT COUNTS." 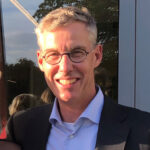 “A few years ago we were awarded a challenging project, close to the eastern English coast. This Galloper project for energy supplier RWE Group included a beaching operation and the associated cable burial started from the beach.

After the plough was pulled back to the beach and the cable was successfully brought onshore, everything was prepared for the cable burial. Guided by a crew on the beach, the Ndurance, which was 400 meters from the coast, started to pull the plough. At the first pull however, the front cylinders collapsed.

It turned out the waves had created a small sandheap in front of the plough, which in hindsight was big enough to alter the forces on the front cylinders of the plough when pulled. Now what? The project team took its time to analyze the situation and the plough team investigated the options to repair. Spares were available, so that was not the problem. The weather was still good, but it was running late and the end of the weather window was in sight. Everyone’s (including mine) initial thought was ‘let’s hurry-up’. But the project team showed they live by the NINA values: they decided that a good night rest before starting the repair works was the better way forward. They were able to repair the plough and successfully buried the cable.

This drive from our team to take the time needed and do the job safely, still makes me proud. It shows their NINA behavior to be exemplary. Indeed a team to appreciate!”